V is for Victory.
This year REA put forward a fresh new band. Hot Property. And they won! 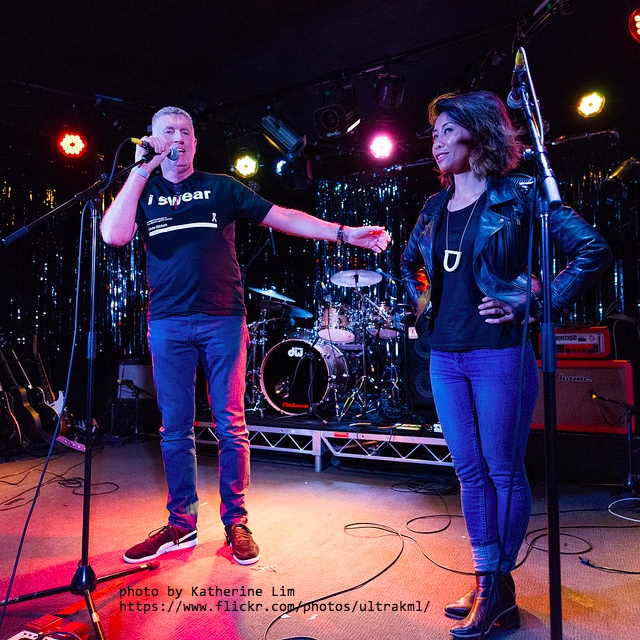 The night started out with an Intro from Nigel Dalton. 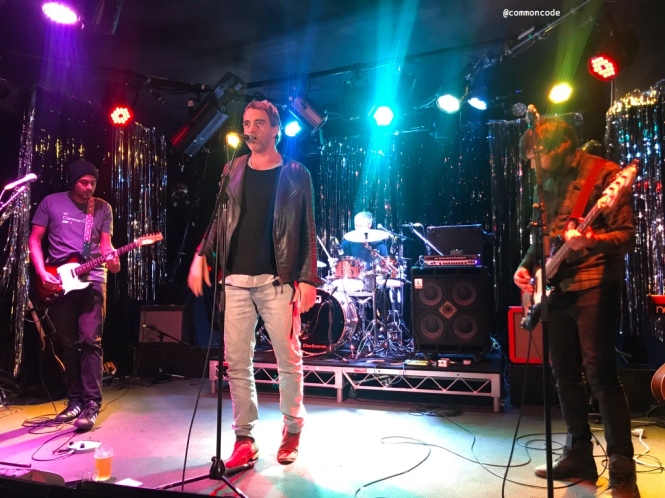 First timers Common Code drew the difficult first spot for the battle of the bands. Their 4 piece kicked off with a moody Nick Cave and the Bad Seeds song “Babe, I’m on Fire”. They encouraged the audience to sing along with “In Manyero” (sp?) and ended with an original song chanting “We are the manifestos”, “We’re all Agile” and posing the question are you Agile? The crowd lapped it up. A great way to kick off the evening’s entertainment. 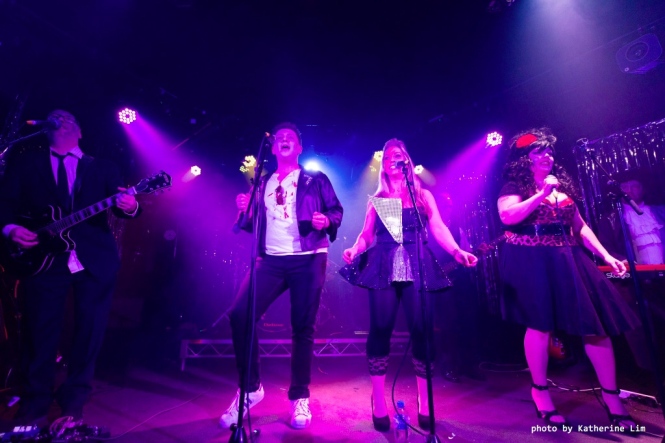 Second band from Seek opened with organ and quickly had the audience singing along to George Michael’s “Faith”.   Then “Raspberry Beret” and continued the 80s theme with Bowie’s “Let’s Dance”. Seek were probably the best band of the night to work a theme. Next was Prince’s “Kiss” showcasing funky bass and guitar.

V is for Valerie.
Three bands independently chose the Zutons song “Valerie”. First to come on over were Seek. 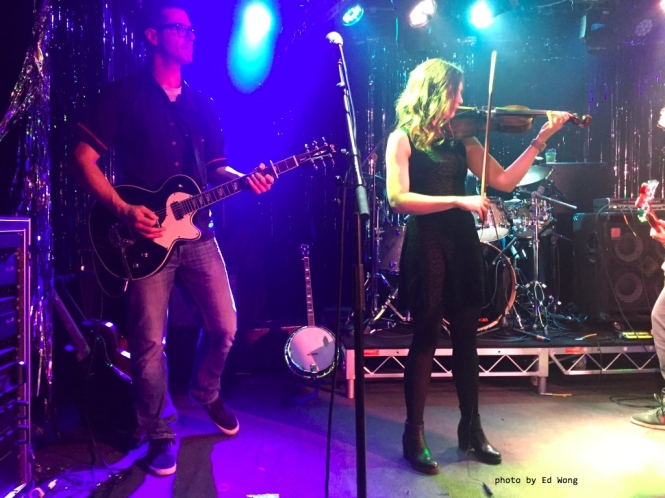 Envato’s band “The Envatones” were third. They had an interesting lineup with violin, trombone, sax. After a short warm up they ripped in to “Valerie”, an even more up beat version than Seek. Crowd loved it. “Come on Eileen” had the whole pub singing along.

By the time the REA band Hot Property took the stage the John Curtain was buzzing and a chant of R.E.A. started. REA worked the theatrical angle really well, starting dead-pan with solo tambourine with Jet’s “Are you gonna be my girl” then turning the energy level up to 11 as the band came in. Next was a punchy, punky version of Natalie Imbruglia’s “Torn”. It’s not the first time Survivor’s “Eye of the Tiger” has made an appearance at #botab, but the crowd lapped it up like kittens. By the time REA played the sultry “Black Velvet” it was obvious that REA would be contenders for this year’s Battle. Next up the third rendition of “Valerie”. REA mixed it up by starting slow and then bursting into a fast and fun version as their two women singers exchanged lines of the song. Last song with pyrotechnics was Tina Turner’s “The Best”. Indeed! 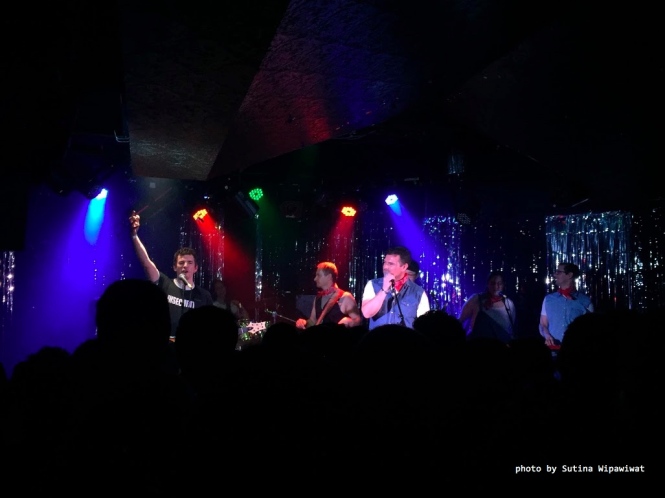 ThoughtWorks band Sparkle Motion have been past winners and opened with violin and the second “Come on Eileen” of the night. Could they top REA’s performance? The crowd practically erupted in joy as they played the Ghost Busters theme. The song had sax and electric violin, great keyboard sounds and even a live ghostly apparition on stage. “We love the 80s”. Who doesn’t. “Let’s hear it for the 80s”.   The whole pub sang along to “Our House”. Boney M’s “Rasputin” was wonderful with violin, a ripping bass line and disco drums. “Hey hey hey” they chanted. The final song from ThoughtWorks had solos from all of the band. Could they win?

We were treated to an encore performance from Envato’s other band! A rousing version of “Mr Brightside” that had everyone singing along. A great way to finish off the evening.

In the end it was REA’s day. They were the judges unanimous favourite. It was a fun, consistent set. Really well played and great song choices. (Except for Valerie.)

The charity Flying Robot School will receive the proceeds of the night. $4750!

Let me tell you a story of how it came to be. Five years on the memories are fading so excuse any inaccuracies.

How the first Battle of the Agile Bands became an event can be traced back to the travel guide publisher Lonely Planet. The three key players all worked together at Lonely Planet’s Melbourne office back in the day.

In the late nineties and first part of the 2000s Lonely Planet was the best place to work in the world. A bold statement perhaps! But remember this was before the rise of Google and Facebook who later redefined what an office space would be. Back then Lonely Planet had a gorgeously renovated warehouse building in Footscray with car parking, a gym, a great in-house chef, barista and roof-top seating with spectacular views of Melbourne and Coode Island. They had cool technology for the time, a great bunch of people to hang out with, good cashflow being the number one in the world in their field and threw pretty damn fine staff parties. Lonely Planet were a company and brand much loved by the people who bought their books. Travellers would have wonderful, life changing experiences following Lonely Planet guidebooks off to exotic places in the world and they loved the company for it. It felt like Lonely Planet was making the world a better place. Staff also loved working for Lonely Planet. It was like a big family, watched over by loving parents, 1970s hippies turned business owners Tony and Maureen Wheeler.

One of the best things about working for Lonely Planet was the in-house band sometimes known as Slabotomy. Every year a new band would be formed to perform rock cover songs at the staff Christmas party. The company had an ample supply of talented musicians (some semi-famous) and eager amateurs. Anyone who wanted to be a rock god or goddess for a night could do so. It was egalitarian and supportive. It was the first time performing in a band for some.

The band would have at least half a dozen singers, a couple of drummers, bassists, guitarists, keyboardists and assorted others. C-Level execs would play alongside warehouse staff. Everyone was equal. Band practice would involve lots of beer and pizza and laughter and encouragement. It was a great way to get to know people from around the company you’d otherwise not have a reason to talk to.

Every year Slabotomy would have a warm-up gig before the Christmas party at the iconic Espy Hotel and staff and random punters would be entertained by an eclectic mix of show tunes, metal, rock, punk and people generally having a really good time.

But a sad thing happened to Lonely Planet. Toward the end of the first decade of the new millennium the once amazing company was being killed by the iPhone. Travellers with smartphones didn’t need guidebooks any more. Google Maps and web savvy upstarts like Trip Advisor combined with online hotel bookings meant you didn’t need a guidebook to see the world any more. Book sales were dropping and Lonely Planet didn’t or couldn’t adapt to the new digital world. Tony and Maureen sold Lonely Planet off to the BBCW. The good ship was slowly sinking and every 6 months there would be a “restructure” and staff were made redundant in huge waves. Morale dropped lower and lower.

David Lutz lost his job as sysadmin in one of those waves of redundancies and went to work for the crowdsourced graphic design marketplace startup 99designs. Lutz enjoyed his job but missed the vibe of Lonely Planet.

99designs had some talented musicians and Lutz wanted to put a band together. He dragged an old drum kit, mic and amp into the board room of the Collingwood office and encouraged his workmates along for a regular Friday afternoon jam session. The sessions were fun but without a gig to work toward it was hard to stay motivated.

In January 2013 Lutz by chance bumped in to Perryn Fowler at that most geeky of events, a GitHub drinkup at the Belgium Beer Café in Melbourne. Fowler was a software developer who worked for ThoughtWorks, a consulting company that Lonely Planet used, and a very good guitarist. Lonely Planet’s band had played with ThoughtWorks before. The conversation went something like this:

“Not bad, you? Still playing with the ThoughtWorks band?”

“Yeah, Sparkle Motion! We get together and make some noise pretty regularly”

After a few weissbiers the germ of an idea sprouted.

“Let’s run a battle of the bands! For computer geeks. Call it something like “Melbourne Tech Companies Battle of the Bands.” Lonely Planet is fucked. There’s hardly any of the old musos left. They’re out but the tech community’s pretty close in Melbourne. We can probably find a couple of other companies with ex-LP peeps. We’d need three companies minimum to make it interesting.”

The next day after the GitHub hangover had cleared Lutz sent an email to Nigel Dalton. He was a mad keen guitarist, previously CIO at Lonely Planet and now head of technology over at REA Group.

“Let’s do a charity gig mid-year.”

Battle of the bands with 99designs, ThoughtWorks and REA.

“Consider the gauntlet thrown down! :-)”

Dalton rose to the challenge. And he provided the much needed organisational experience to make the event happen. He had a band, gear, contacts and a venue in mind. The John Curtain hotel in Carlton. The REA band “Lost Property Office” (a gentle hat tip to LP) had performed a gig there.

It was all falling in to place.

Rehearsals started in earnest now. We all had something to prove. Could the startup take on the goliath 10 times its size? 99designs moved office and the new address had a grimy and echo-y garage to practise in. Much more suited to rock-n-roll than a pristine board room at the old office. Lutz ran a logo design competition for the band https://99designs.com.au/logo-design/contests/band-hellvetica-logo-m-224884 The 99designs set list design process was very Agile and Lean with much pivoting and waste reduction.

REA and ThoughtWorks also practised hard for the event but they had no idea of how good 99designs would be.

Over the next couple of months Dalton, Lutz and Fowler discussed many details.

Set lists – would any bands pick the same songs to play? We showed each other our lists.

Which charity to sponsor – we discussed letting the winning band decide how to donate the money, but ended up choosing World Vision sponsored child Talent Kapesa in Dande District, Northern Zimbabwe. To buy goats!

We thought the winning band should get to play an encore or two.

We also wanted to have an epic encore song at the end of the night with members of all the participating bands involved.

The MC for the night would be someone with charisma who was well known to the musos. We contacted Wayne Murphy who was a Lonely Planet band regular and he said yes he’d do it. He’d even sing a song on the night.

The judging would be an impartial panel of experts. Murphy would be one judge, the second was Vanessa Toholka @plasmov presenter on the RRR radio show Byte into IT, the third Paul Andrew from Smokestack Studios.

The second, third and fourth battles were refactored, trimmed down and optimised. Now we don’t have a special MC or judging panel. Subsequent battle of the bands have used the impartial bar staff to judge the winning band.

Now each year we sell out the event. Each year we have more companies interested in joining in the fun. Company bands with members from the Lonely Planet diaspora.